Happy New Year and all that. I went to yoga class today, which will likely be the only time I go this year, but Hey! At least I can say I've worked out in 2019.

I used to come up with a word of the year when I blogged before, a word that was going to be my focus for the year. I stopped doing it, because I never really focused on it after the first of January.
But there is one word that is so obviously going to be my mantra for 2019, I have to share it.

I mean, duh. My life is going to drastically change in less than three months. Whether we pick up and move to Arizona or if I start a new job here in Cali or if I become a stay at home mom, it's going to be a huge change.

It's kind of exciting when you think about it. No matter what, my life is going to be way different by the end of the year.

A reason to stay


So, my husband decided that if we weren't going to move, if I was going to be unemployed, and if he was going to be the sole breadwinner, he needed to go to his boss and explain the situation and see if he could get a raise. His company is very small, and could close permanently at any time, so he was hoping to get some kind of clarity on the company's future.  Unfortunately (or not, depending on how you look at it), my husband has been with the company for 28 years, and his salary has been maxed out for some time. We werent expecting much. Still, it doesn't hurt to ask. And really, I was hoping that they would make an offer we couldn't refuse, and it would give us a reason to stay.

His company was very generous. They gave him a 10% raise, effective immediately. They will give him an additional  $9000 "stay on" bonus on April 1, which is the Monday after my office closes. They told him that the company has at least three years of business ahead of them.

But here's the problem.

They didn't really give him any reason to stay.

They gave him the raise immediately, whether he leaves or not. It's true that he only gets the stay on bonus if we stay, but $9000 really isn't that much, and that's before taxes. The stay on bonus isn't going to make or break us.

They offered him a remote position. So there's no reason whatsoever to stay.

True, the remote position is not going to last forever. In fact, my husband doesn't expect it to last longer than 6 months. But still, that's 6 months longer than we were originally expecting, which will put us in an even better position if we go.

So, that didn't help us make our decision at all.

Posted by The Lovely One at 7:55 PM No comments:

One of my friends suggested I make a T-Bar--- you, know, list all the reasons to go in one column, and all the reasons to stay in the other. I wasn't going to do it, because I constantly have a T-Bar going in my head. Plus, there are some reasons that I feel are worth two or even three entries ("live with family guilt for the rest of my life" should be at worth at least seven entries, right?). But this will go back to writing about my problems. If I write it out, it might bring clarity. So here we go.

Is there any clarity? Does the answer magically pop out at you?

Posted by The Lovely One at 7:00 AM No comments: 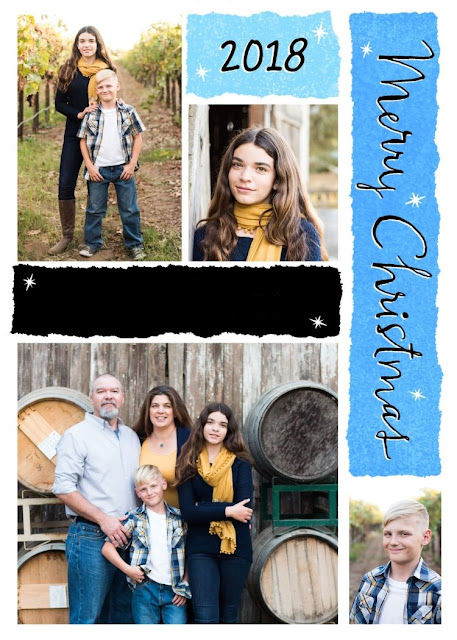 We probably can't take pictures like this in Arizona, can we?

It's been awhile, hasn't it?

The last time I posted-- way back in April of 2017-- I was writing about something as trivial as weight loss.

Don't worry, I've still be around. My instagram feed is full of  daily happenings of me and my family. We're all fine, thank you for asking.

Somewhere along the way, I stopped doing that.

But now, it's time to get back to basics. I have a problem, and writing about it is going to help.

This all started over a year ago, in October of 2017. Our office received an announcement that the company was going to open a new office, in Arizona. The office was going to do California work, but would just be housed in Arizona.

At first, I wasn't worried. We needed help, so we were glad they were opening another office. I really didn't care where they opened it. Open it in Antarctica, for  all I care.

But then another office opened in Arizona, and then another. Meanwhile, there was a hiring freeze in California. Rumors were flying.

And then, a bombshell-- we were told that eventually, all California business would be handled out of Arizona. No one was losing their jobs, everyone was invited to continue their employment.

And here lies the problem. I live in California. And an 11 hour commute each day might be too difficult. But my office is closing at the end of March.

For some people, the choice was easy.  The single parents, the one-income families, and those whose spouses had transferable jobs had signed their paperwork and were moved within the month. The other side of the spectrum-- those about to retire, or had less than 5 years with the company, or those who had spouses with significantly higher salaries-- never even thought of moving. Many of them have already found new jobs and have left the company.

And then there's me.

I have been with the company for 16 years. My ability to perform any other job is questionable, and no one on God's green earth would ever pay me what I'm making now. I'm only 45, so I can't retire yet. My husband's job is not transferable. His salary is higher than mine, but he has maxed out on his salary, whereas I have not. He works for a small privately owned company that may be sold off any day. I work for a major corporation that isn't going anywhere.  My children are in an excellent charter school here in California. Our medical insurance is through my company, and the  benefits offered by my husband's company aren't nearly as good. My mother and my best friend have both wished me well in Arizona. My father and my stepmother have said family is the most important thing, and my family is in California. I have lived in California all my life,  I know nothing else. We can buy a home on an acre with a pool  in Arizona for less money than a two room shack in California. It is approximately 294 degrees in Arizona from May until October each year. There are strange dust stroms called haboobs. I currently live in the city that was named the second most dangerous city in California.  My husband and I have made charts and spreadsheets and discussed this every night for months. We literally change our mind from day to day on the best course of action.

You see how my thoughts are all over the place? I have no idea what to do.

Posted by The Lovely One at 9:22 PM No comments:

It is also Ash Wednesday. And if you're a good Catholic girl.... well, you're probably not ready this. But if you're a regular Catholic girl, just doing the best you can, then you might be thinking about giving up something for Lent.

But here's the thing. I've already given up coffee and soda. I haven't been going out to fast food and I've cut out a lot of sugar. I don't have rice or pasta or bread. Foodwise, I really only have two vices: French fries and alcohol.

I ate my share of french fries while I was in Vegas last weekend. They're so good! They're my weakness. But I also drank my share of alcohol this weekend, too. The weekend would not have been as good without alcohol... or french fries.

So, I covet both of these indulgences. If I'm being honest, I probably covet alcohol more than french fries. So  it makes sense to give up alcohol, right?

Right.... but man. It's a long time until Easter. And there's crab feeds and birthdays  and basketball and baseball and girl scout cookie booths. Yeah... I just don't think I can do it.

Maybe I should just give up red meat instead.

I had been worried about eating while on my trip. It was really hard when all the menus looked like this: 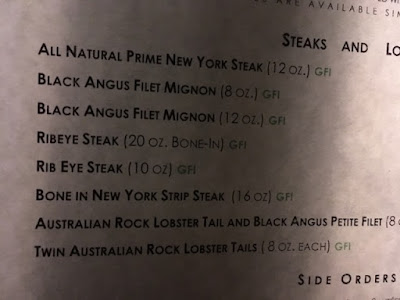 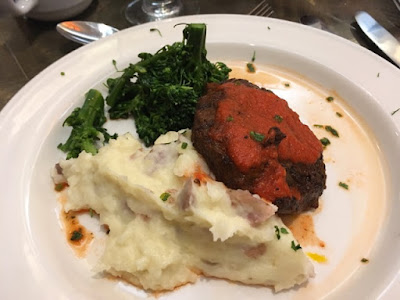 And then there was a whole lot of this mixed in: 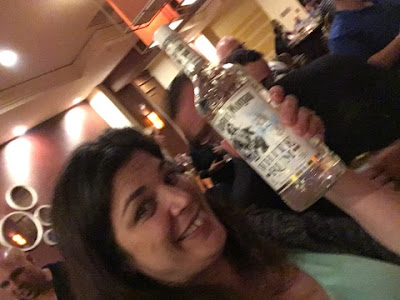 But here's what worked for me.

I didn't eat any bread. Well, very little. I had a 1/4 of a croissant, and a bite of a danish. But no sandwiches and no rolls at dinner.

I didn't have any rice or potatoes. See that heap of potatoes in the picture above? Yeah, that stayed on the plate. I did eat about 10 truffle fries one night, but then I passed the rest around my dinner table. Let me tell you, those ten truffle fries were AMAZING.

I skipped dessert. I have a weakness for cheesecake, and they served that on the last night. I did have two or three bites of the cheesecake but I left the rest, and I said no thank you to dessert all together on the other nights.

I indulged when I wanted to. All this sacrifice was because I knew I was going to drink a whole lot. And I did.


The end result? I lost half a pound! Hey, when I thought I would be lucky not to gain, I'll take that!

The Lovely One
Someone once told me that if I didn't have anything nice to say, I shouldn't say anything at all. So I started a blog instead.

I am a writer. I Entertain. Nothing I write on here should be considered truth. If you read something on here that sounds like something that's going on in your life, it's purely by coincidence. Remember, nothing on a blog is true unless you admit that it's true.

My giveaways are listed on Contestgirl